Age: 43
Country: Australia
Procedures: Breast Lift and Augmentation
Cost of holiday: Approximately $8,800 AUD inclusive of surgery, hospital stay, 4-star accommodation for 14 days; all care and transfers on the ground in Malaysia. Cost of just the treatments at home $16,500 AUD+

Simone’s surgery lifted her breast (and spirits!) clear off her chest. 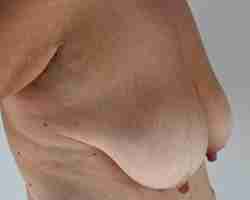 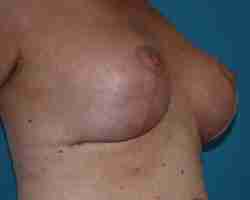 From the early 80’s, I have taken a keen interest in breast surgery after I was “issued” with a set of breasts that were eager to be tucked into my undies.

After breast feeding and losing around 60kgs, my poor old boobs had become lifeless stretch-marked pieces of skin. When I leaned forward, they no longer bounced up and down, they now just fell – trying in vain to reach the ground. My chest area was flat as a tack, however my stomach had two great balls of flesh – one noticeably 2 cup sizes bigger than the other.

I know what I wanted for “new breasts” – I wanted most to be removed. Then in its place, two “furry Brazilian” round implants. The boobs could look as fake as they wanted – I didn’t care.

I was non-negotiable on the following:

• I wanted to see my nipples when I looked down. I had NEVER seen my nipples by looking down, I had only seen then in the mirror when I held them up.

• I did NOT want ANY breast tissue to touch my stomach/rib area skin EVER again. They had to be lifted so high that I was going to re-define “high profile”.

• I did not want tear-drop which could potentially slip or rotate. I had ALWAYS HAD an unnatural shape, I wasn’t going to risk it with anything other than round implants.

So you get the picture that I am a researcher, “visual” and maybe a bit determined.

For my “situation”, I am classed as a medicare patient in Australia, and my quote was $3,500, somewhat cheaper than overseas, but I had my reasons for going abroad.

I narrowed down my countries for surgery to Thailand and Malaysia quite quickly. I chose Moviestar Makeovers because of their website – I could see examples of the surgeon’s techniques and I could read about the clients “always favorable” experiences. So KL, Malaysia it was.

For accommodation I chose Lanson Place, which turned out to be pretty popular for those that aren’t too phased about their surrounds. It looks and feels “tired”, brekkie wasn’t anything to write home about, but IT DID THE TRICK.

While they are serviced apartments (with a kitchenette), I quickly worked out that for 6 – 10 ringgit a day, I could have a sizable meal so bugger cooking.KL is a foodie’s mecca and for the equivalent of $2 – $3, I was going to experience it. (go the Pavillion Food Court).

So did I stock the kitchen up on groceries for my release from hospital (as recommended) ….. no! I went out for dinner instead. Beds are “dreadfully” firm so post surgery, I, like nearly everyone else I spoke to, slept upright on the comfy lounges – I rearranged my lounge room before I went to hospital and asked them not to shift it back. Because the Lanson is the middle of the range of accommodation, a lot of clients choose it and that’s one of the things that makes the holiday (if you are the social kind).

Every morning, we would meet-up for brekkie in “Frankie’s Corner” – aptly named because we all looked like Frankenstein’s children. Tips, tricks and experiences were bared to all who attended and it was fabulous support.

I researched as much as I could and prepared for the worst case. I wasn’t just having poached eggs made into chicken fillets, I was going all out.

I took all button down the front clothes and nighties – in case I struggled to lift my arms and pull garments over my head.

Because my focus was on shopping, I traveled over with hand luggage five days prior to my surgery so I could get the lay of the land and “significant” purchases out of the way.

For my situation and budget, Dr Nasir was my man. To say that I am now “in love” with his skills as a surgeon, is an understatement. Having said that, from meeting five other young ladies who were having straight implants by five different surgeons.

I found Dr Nasir, my anesthetist, and hospital staff fantastic. I am forward in nature, have a “prankster” sense of hum our and love to make people feel “happy” when they are in my company. They all participated willingly in my “ribbing”, and some gave back as much as they got.

Prince Court Hospital – amazing. The patient care, technology, facilities, ancillaries (catering, house keeping, admission, and discharge) were first rate. Patient records were all updated electronically via oversized “tablets”, house keeping “spring cleaned” EVERY day, vitals were only taken twice a day by three lovely nurses (not every hour, on the hour during the night only as is traditional in Queensland). I’m sure my hospital bed (which was remarkably soft and even came with a doona) had a sensor in it …. every time I got out of bed, somebody would come in to strip and remake it. Each room had an LCD TV, broadband access, coffee making facilities, dining setting, sofa bed (for overnight guests), and so many “complimentary” potions and lotions etc. The menu was at least 10 pages long and seemed to be a-la-carte prepared.

I did not get my Brazilian implants as planned because they take five days to come in. I had to go with Mentor – which I was told that I would need to replace in time due to capitulation.

In addition, my underarm tightening was left out, so I still have that. I cannot think of any way that I could prevent this from happening again, unless the client has access to the surgeon before they leave and seek confirmation from them direct that they understand what the client wants. I met another girl in KL, who also said her surgeon was not informed that she wanted Brazilians. Brazilians, which are a far superior product, are cheaper than Mentors in Brisbane.

Play by play of my surgery experience:

• When I first saw my boobs, they were NOTHING like what they are 6 weeks post surgery – for me, while they looked completely out of kilter …. I still loved them because I could see my nipples and they didn’t sit on my belly

• The next morning after surgery, I showered myself unaided – even lifting my arms to wash my hair.

• After showering, I put my compression garment on unaided.

• I was given painkillers and sleep aid tablets on discharge, but I didn’t need them.

• I had the normal “anesthesia”with issues of no “Number Two’s” for a number of days post op and the associated bloating etc.

• As soon as I was released from hospital I went out shopping and buying dinner, as the days passed, so did the strength to carry more parcels home.

• I kept applying the “gel” Dr Nasir gave me to my scars for 4 weeks.

• I didn’t buy heat and cold packs, instead I got extra face-washers, wet them, lay them flat in a plastic bag and froze them

• Twice a day, I had a hot shower, cold face-washed my boobs, and then re-gelled my scars.

• I saved my “sleeping tablets” for my plane trip home. I was asleep before the plane took off, woke up once, stretched my legs, took another tablet and then hand to be woken to get off the plane at the Gold Coast. They were seriously GREAT tablets (for me).

My Visa Tale (has to be told so that it might assist someone in the future):
Take a back-up debit Visa Card. My one and only source of money (debit Visa) was eaten by a hungry ATM the moment I arrived in KL. Because I had no “bond/imprint” for Lanson, I could not use room service or the telephone.

Lucky internet was included in my prepaid accommodation, I could talk to my hubby in Australia on Skype, and he would phone all the “visa card people” from Australia and hold the phone up to the monitor so the Visa people and I could talk to each other. It took 3 full days before I got my first emergency cash. There was a $US5,000 limit per day. If you get a emergency replacement card – you cannot use it to withdraw money from an ATM, you can only use it for purchases – BUT in KL, a lot of sellers wouldn’t accept it.If I had a CREDIT Visa, I would NOT have been able to have emergency cash.

So my desire to land in KL and start shopping for five days before my surgery was thwarted. So how did I survive in KL, with no money and only carry-on luggage? Hmm, lying on the bed in the foetal position sucking my thumb isn’t really in me, so I sucked it up and dealt with. I asked for help from the people who looked like they were GG clients (tell tale signs – they are the ones sporting bruised puffy faces, sometimes still in bandages). I would like to say a really HEART FELT THANKYOU to “Jonathan” (Lanson concierge), and all those Aussies’ and Kiwi’s who gave me temporary money, shampoo, toothpaste, taxi rides, milk, other emergency supplies and lent me DVDs.

• Bus from Lanson to KLCC is 1 ringgit

• Don’t buy DVD’s from China Town – stick to one seller from BB Plaza – they will exchange dodgy DVD if you are unlucky to score one, and they also tell you if a copy is not too good yet

• Low Yat Plaza (the technology shopping centre) is a little cheaper than Australian prices …. But do your research before you leave so that you know if you are getting a bargain

• Size 10 feet are not catered for in KL

• Western “fashionable” clothes are no cheaper than in Australia – so because I didn’t NEED stuff, I didn’t buy it

• In the end, my bargains were DVDs, belts, hair decorations, silver (from Central Markets), food and unusually – toiletries (toothpaste is SO cheap there)

I would like to say a HUGE thank you to Rowena (my client manager) – you are a beautiful person who makes hearts sing just through meeting you. Richard (my “bodyguard” driver), you showed good humor to all my jokes and Anthony (the long distance driver) who goes beyond the call of duty. He even showed me where Barlow and Chambers were incarcerated. Bless you all.

If you would like to speak to Simone or other clients please contact us at Moviestar Makeovers.